The Piranhas have always given back to it’s members and provide educational opportunities.  Since 2007 the Piranhas have periodically brought in Olympic Swimmers, free of charge, as guest speakers for the swimmers and parents of the Team.  This page is dedicated to that effort. 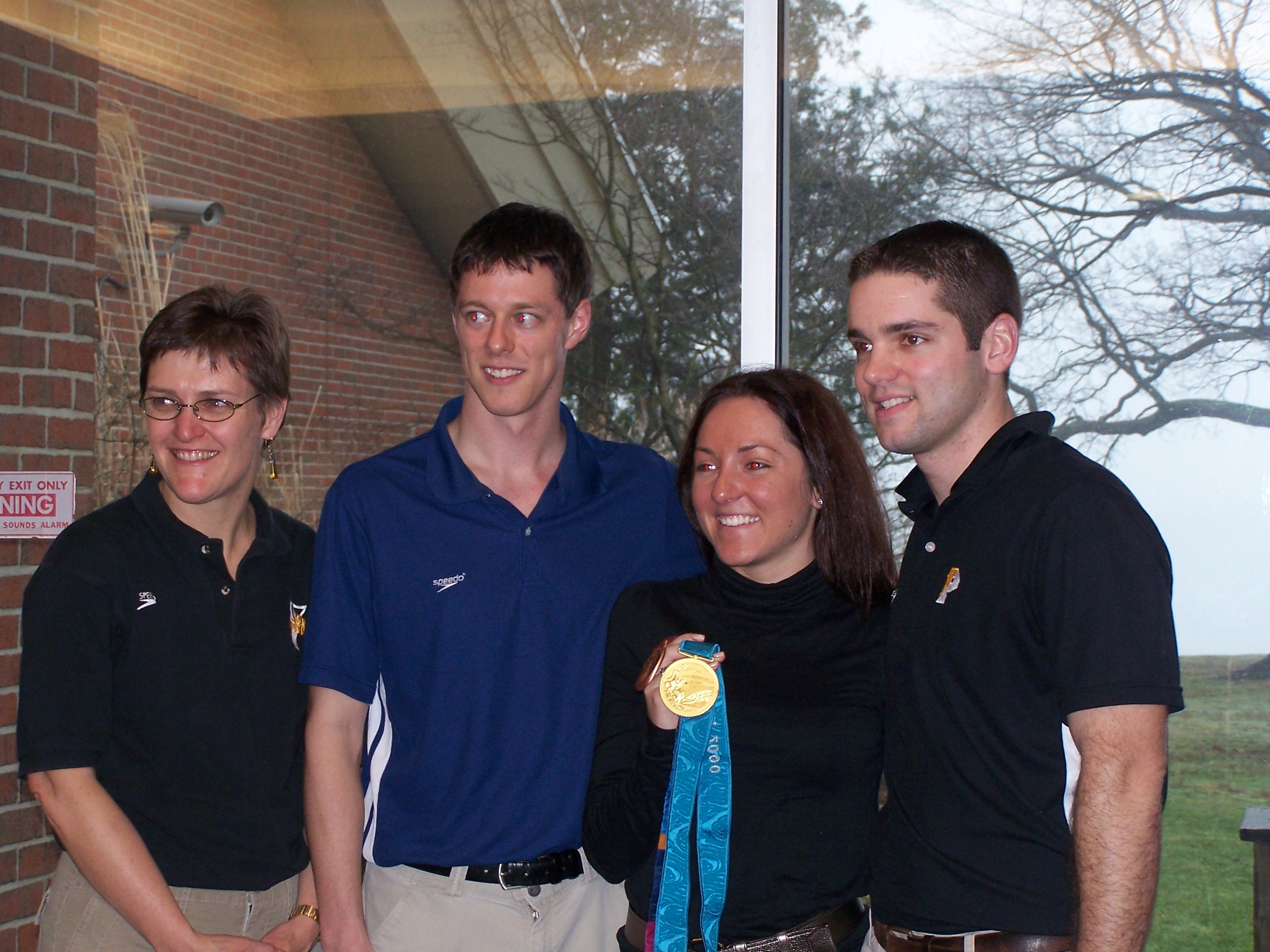 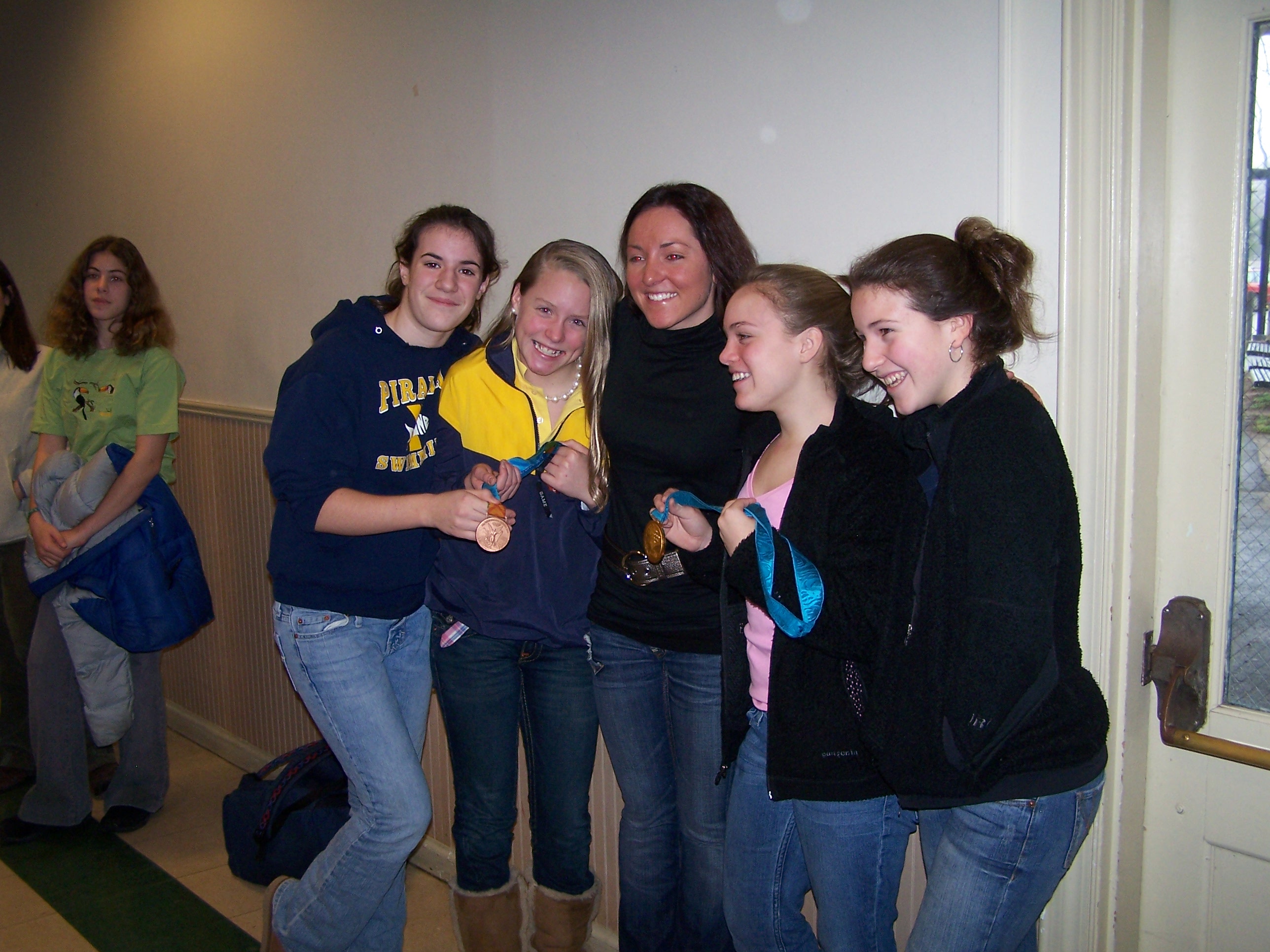 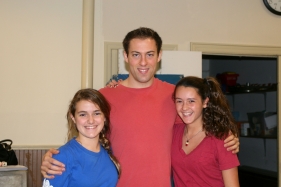 I hope everyone enjoyed the day as much as I did on September 28th and left as inspired as I did. I think it is great that the Piranhas can offer this sort of “enhancement” to the Piranha program and for free, no less. I didn’t meet an Olympian until I was racing them and this was after I graduated college. I truly enjoyed, and I think I speak for everyone, Rebecca’s charm and charisma when she was teaching the kids in the pool and speaking in the gym. I personally enjoy hearing stories from the people who lived them and this was no different. What she was thinking before her Olympic race, what was going through her mind during the Olympic final and her thoughts afterwards. I feel like she was letting us into her innermost thoughts and feelings (now I’m getting corny, I know). Overall, I thought the best information that came from the visit was her humble beginnings as a swimmer. Her stories about not wanting to swim at the age of 10, taking a nap in the locker room to avoid practice but then getting to a point later on where she never wanted to miss practice. The night before her visit I was doing some research and I was specifically looking for Rebecca’s results as an Age Grouper. Those are usually not newsworthy so you seldom hear about them. Although I didn’t know what I would find, I was surprised (pleasantly so) to find out that she was not a ‘great’ age group swimmer. Above average, yes, but by no means was anyone crowning her as the next Olympic Gold Medalist as a 12,13 or 14 years old. So I started my introduction as I did with asking the group about her rankings as an 11/12 and 13/14 year old. Ironically enough, Rebecca had no idea she was not ranked in the top 100 all-time for USA Swimming in those events at those ages. I hope this resonated with the parents and swimmers in the audience that not being the best or even close to it at 10, 11, 12, 13 or even 14 does not mean you cannot be a great swimmer at 16,17, 18 years and beyond. 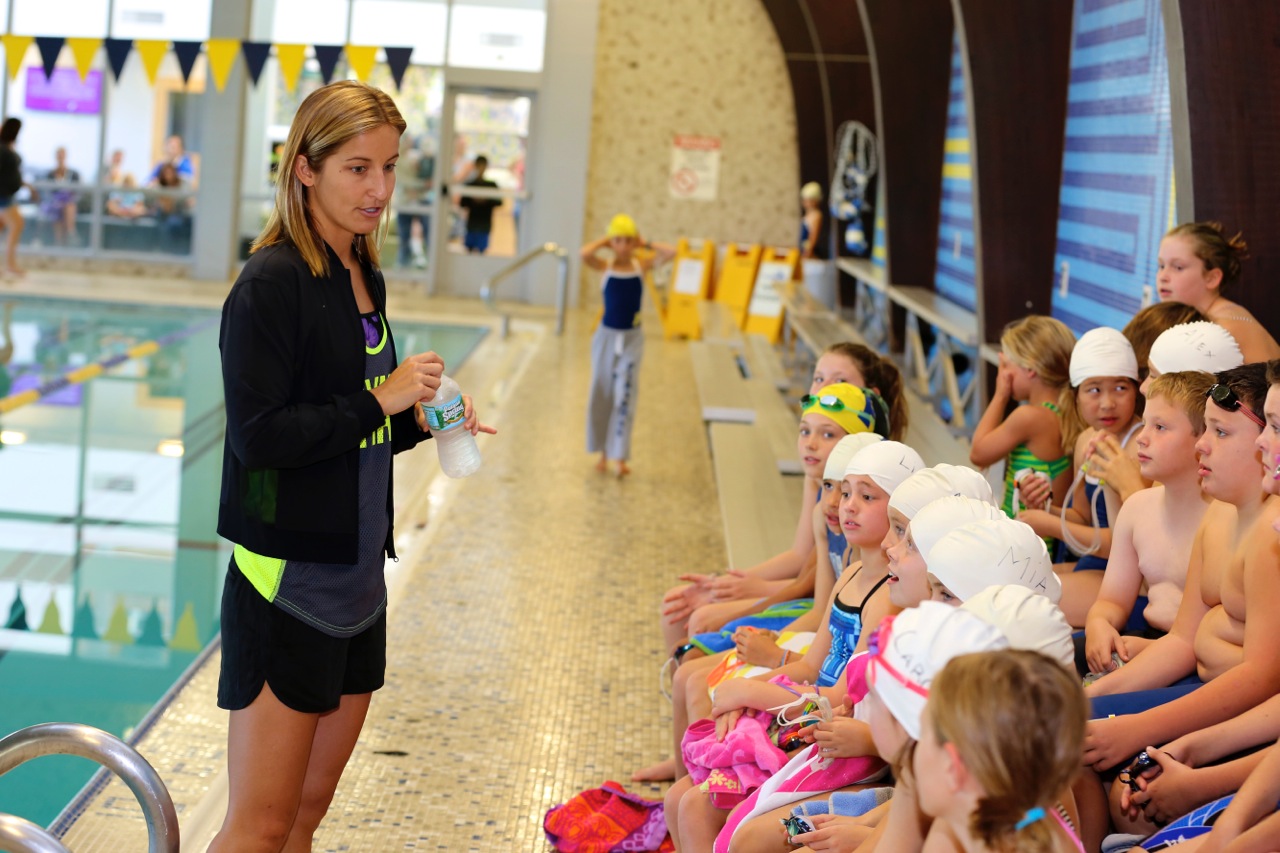 WHAT AN AWESOME DAY!!
The day started out at 10am with about 60 wide eyed 11/under Piranhas on deck waiting to hear from an Olympian. Kim Vandenberg made an appearance this past Saturday to run a swim clinic for the Piranha Swim Team. Kim is a 2008 Olympic Bronze medalist and multiple International medalist at every big International meet you think of. On this morning it wasn’t Australians or Europeans waiting to race, but a captive audience of eager 7 to 11 years old. Kim started her clinic on land with a short dry land warm-up on deck where she utilized very functional and deliberate body movements (not your grandparents stretching routine) to warm the kids up. Some of the movements could have been mistaken for the latest dance moves. She then dove in the water and demonstrated a few freestyle and butterfly drills as the kids watched from the side of the deck. Once she was done it was the kids’ turn. All the drills Kim performed had to do with body rhythm and awareness, length of stroke and body position in the water. She spoke to the kids about how important it was to pay attention to technique and NOT rush through drills. I really hope that statement sounded familiar 🙂 After about an hour it was the 12/over’s turn to do the same. Although a bit quieter and smaller in number, the older swimmers received the same great clinic and message from Kim. Once everyone towelled off and dried up, it was time to hear Kim speak. The best way I can describe Kim’s personality is that she is genuine and real. Her love of swimming was obvious and her message of perseverance and sacrifice is something all swimmers and athletes can relate to and learn from. As Kim said, “If you love what you do, the sacrifices aren’t as big a deal.” and in regards to confidence, “it took years of failing and not reaching my goals to realize that.” If there is one thing I have learned as a coach from meeting and hearing Olympians speak, is that they are human and “put their pants on one leg at time” like the rest of us; they just decided to maximize their ability and desire. The Question and Answer session fielded such hardball questions as “What is your favorite stroke?” and “Did you swim in the Olympics?” but the best question of the day was “If 30 year old Kim can speak to 12 year old Kim, what would she say?” Her answer was, and I am paraphrasing, “be confident.” The day ended with autographs and pictures. Kim signed over 200 autographs for the kids in attendance with a bright smile for every picture. Thanks for a great day Kim!!

Anyone who couldn’t attend and would like an autographed picture of Kim can contact the Piranha office. We have some extras and will hand them out while supplies last. I couldn’t think of a better way to put a capper on week 3 than with a visit from 3 time Olympian Elizabeth Beisel!  Too bad we couldn’t do something like this every 3 weeks.  LOL.  I seem to say this every time we bring someone in, but she was the best guest speaker we’ve had, and we’ve had some great ones over the years.  I really hope everyone enjoyed the day as much as I did.  Not only was she down to earth and charismatic, she was gracious and showed humility, virtues I wished all great athletes embodied.

In so many way she is an ordinary person and ordinary people do extraordinary things every day!!  Her story about being sick before her first final at the Olympic trials in 2008, getting injured before the 2016 trials, playing the violin, playing pranks on people (well, Michael Phelps to be exact), resonated with me.  Being nervous, playing an instrument, injury, these are things that happen to regular people all the time.  I think the message that will stick with me the most is when she spoke about believing in yourself and if you don’t believe in yourself behind the blocks, no matter how you prepared, you will never swim up to your potential.   This statement is true for everyone in every walk of life if you just replace “behind the blocks” and “swim.”

Thank you Katie for an awesome day!! 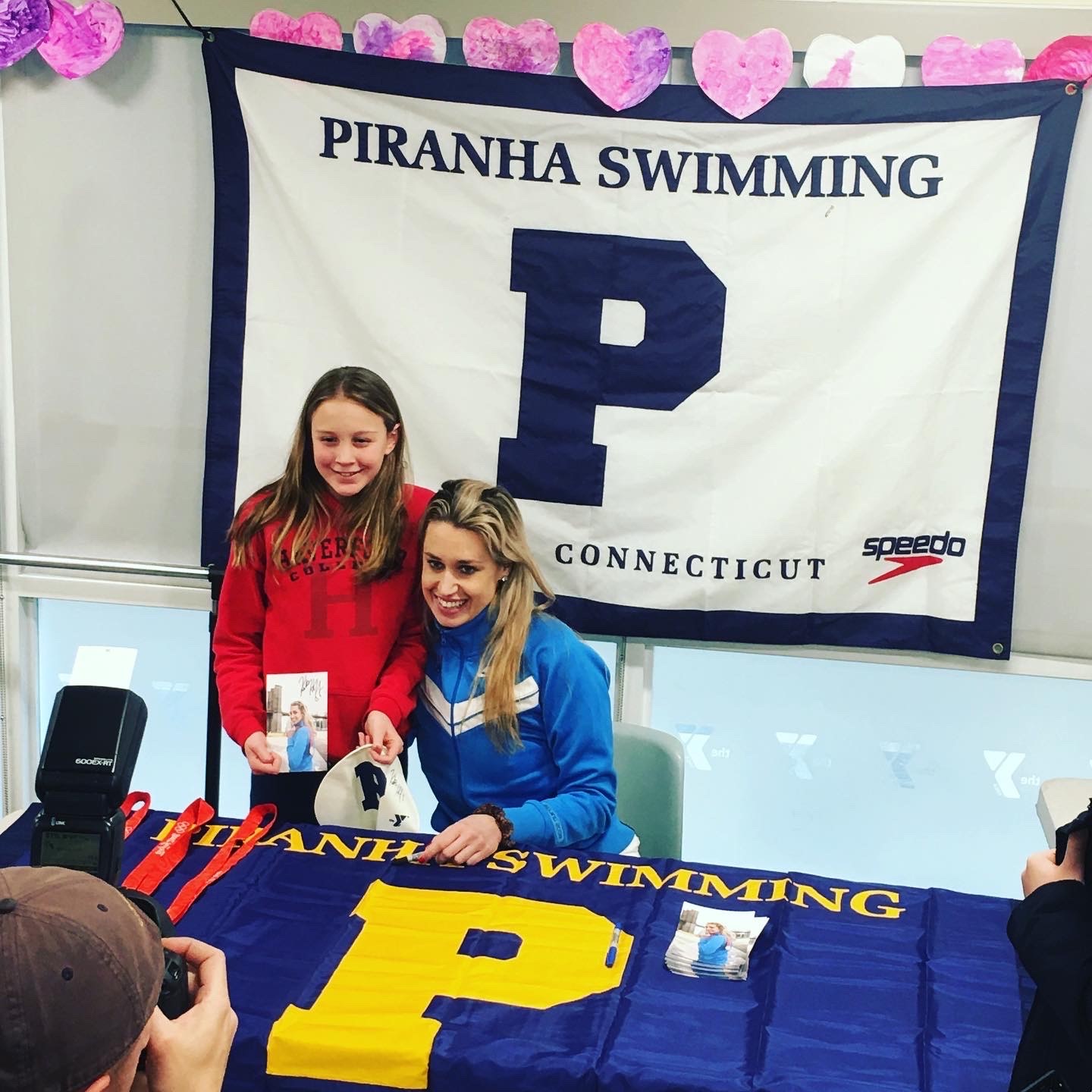